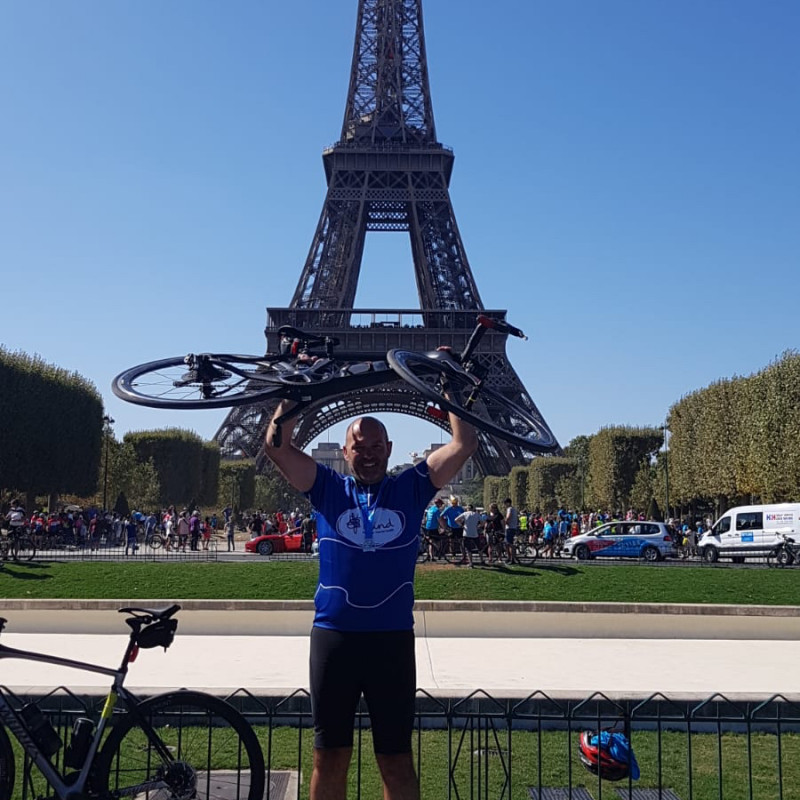 He did it! Our own charity hero, David Wilson has completed his mammoth ride, raising nearly £3,500 for mental health charity, Mind!

348 miles covered in 4 days, in weather ranging from 40 degree heat to a thunder and lightning storm. David’s own highlights included a sobering and humbling ride through the Somme Valley and his arrival in Paris, cycling along the Champs Elysees, around the Arc de Triumph and to the foot of the Eiffel Tower while the traffic came to a standstill and the crowds cheered them on!

Along the way, David shared some emotional moments with his fellow cyclists who spoke about their stories of what led them to embark on such a challenge for their respective charities.

More familiar with vehicles of the four-wheeled variety, one of our Fleetwood Car Centre team is set to swap cars for a bicycle when he hits the road en route from London to Paris, later this year.

Following a New Year’s resolution to be more charitable with his time and help raise awareness of those less fortunate, FCC salesman, David Wilson, has been training for the 308-mile cycling challenge which starts on the 25th July. Armed with nothing more than his trusty Ribble R872 road bike, his passport, a couple of cycling jerseys and some shorts, David will spend four days heading south to the French capital. He hopes that his efforts will boost funds for mental health charity, Mind.

With Motivation in Mind

The charity is close to David’s heart, having recently had a family member benefit from the care and attention of mental support workers. “I appreciate that not everybody is so fortunate to have a similar support network so I am hoping to raise as much money as possible for Mind to help continue their invaluable work,” said David.

Having decided to take part in the ride in early February 2018, David’s training efforts have been hindered by poor weather. However, he remained unperturbed and began training in earnest at the beginning of April, undertaking some 20-30 mile rides after work, three times a week. On his days off from Fleetwood Car Centre, David has been completing creditable 60-mile rides. The lighter evenings and better weather will now allow him to increase the distance by ten or 15 miles each time.

David has also had to think about nutrition throughout the challenge. While he would like to think that he will stick to a healthy diet of slow-burning carbs, lean protein and copious amounts of hydrating water, he may give way to temptation with his tried and tested list of comfort food, including bacon butties, cake, coffee and Jelly Babies! Either way, he’ll need to partake of sachets of energy gels to keep him going through four long days of cycling. After each stage, David is hoping to recover by drinking lots of water to prevent cramp, applying anti-chafing cream to avoid saddle soreness and getting a good night’s sleep, ready for the next grueling leg. With temperatures expected to reach 26C as the route approached Paris, the riders will certainly need their rest! 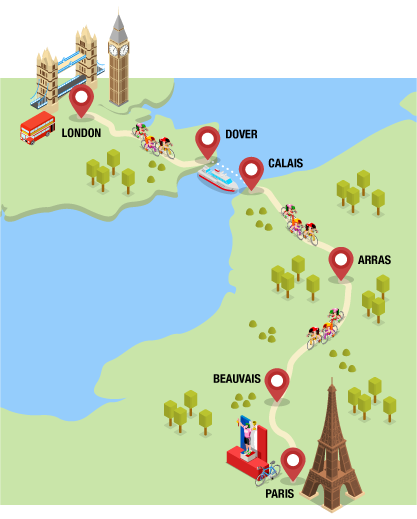 First up is a tough first day leg of 95 miles from London to Dover through the pretty Kent countryside, then the cyclists will cross via ferry to Calais. After an overnight stop, they’ll hit the road again, travelling 75 miles through more picturesque landscapes and villages on their way to Arras. David is also hoping that he’ll get chance for some sightseeing along the route, as well as an opportunity to pay his respects at one of the many World War battlefields in Northern France.

After a stopover, the cyclists then head 70 miles, over the river Somme and past some of the most beautiful chateaux in the world. One last overnight pause at Beauvais, and then it’s a straight run of 60 miles to the Bois de Boulogne park in Paris.

Asked whether he had any concerns for the trip, David said: “I only took up cycling 2 years ago and whilst I have already completed 60-80 mile rides it usually takes me 4 or 5 days to recover. Therefore, my biggest concern is having the stamina and fitness to cover up to 95 miles each day over the four day ride. Cycling in a larger group is something I am unfamiliar with and the odd time I have I haven’t really been comfortable with it.”

In fact, of the 100 riders braving the route with David, he only knows one other cyclist, his friend Adam, who is also riding for a worthy cause – SANDS, an organisation that supports parents following stillbirth and neonatal death. Last year, kindhearted David also successfully completed a local 50 mile charity ride for The Cystic Fibrosis Charity.

On successfully completing the challenge, there will surely be some reward awaiting the pair in Paris, aside from the huge sense of achievement from reaching their respective fundraising targets. “I would ordinarily have a large beer,” said David, “but as I haven’t touched alcohol for nine months, I’ll celebrate by watching the final stage of the Tour de France in Paris on the 29th of July instead. It’ll be interesting to see how the professionals do it!”

David is also looking forward to making his way back home after the excitement of the ride, no doubt eager for a bit of R&R. “Skyline Tours and Events have organized for us to come back via train which will actually be my first time on Eurostar,” he said.

Once recovered from the London to Paris ride, David says that he’ll be looking to plan his next challenge, possibly that of the Coast to Coast ride. Stretching 190 miles from Whitehaven in Cumbria to Sunderland in Tyne and Wear, this will be another creditable achievement.

If you’d like to sponsor David for his valiant cycling efforts, please visit his Just Giving page, here or pop into our Fleetwood showroom to offer some encouragement and wish him luck. You’ll be able to follow David’s progress via our social media pages. Watch this space!